Effective Termination of a Purchase Contract 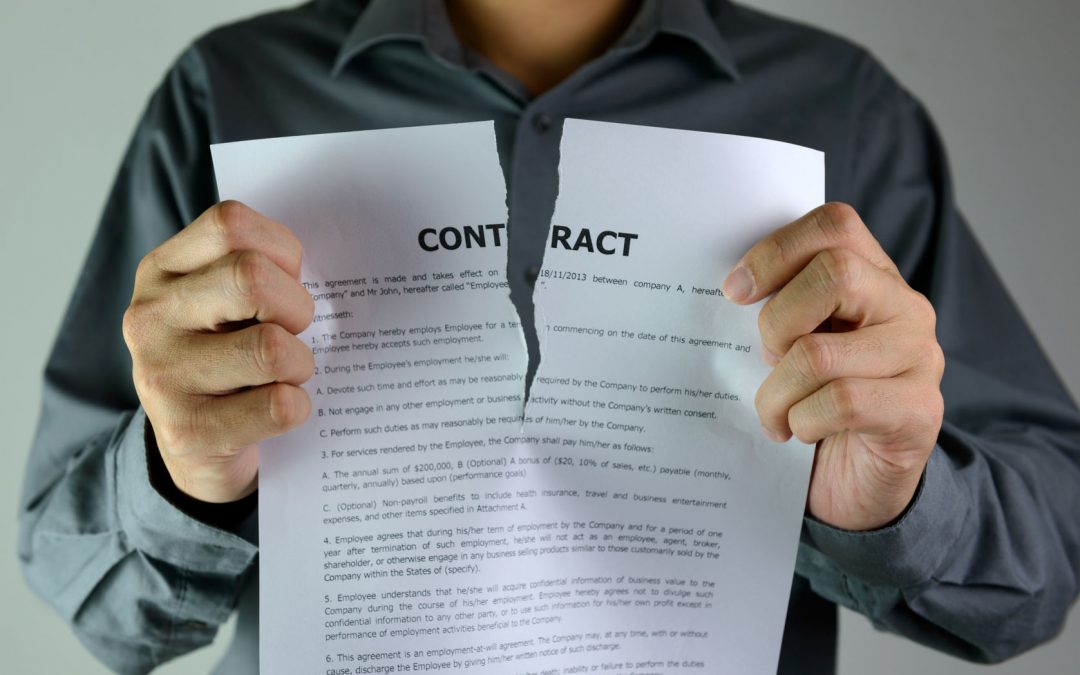 Last year a client came to me with a problem, which in my line of work is not too unusual. The client was in contract to buy a spec home from a custom homebuilder. The contract was on the builder’s contract, not the CBR/CBA Real Estate Purchase Contract. The contract was contingent upon the buyer getting satisfactory financing. In addition, the client was going to move to the Columbus area from another part of the country when he went into contract, but circumstances had changed and now he was not making the move.

The home was priced under a million, but not by much, and the client had made a very significant earnest money deposit with the contract. The deposit was paid directly to the builder.

When the client discovered that the promised job was really no better than where he was, he decided it was not worth disrupting his family’s life to move to Columbus. He informed his agent that he would not be moving to Columbus and needed to terminate the contract. The agent understood the situation and knew that while the client would qualify for an owner occupied loan if he moved here, there was no way that he would qualify for, or would want, to buy the Columbus home as an investment property. So the agent decided to exercise the financing contingency as the way out for the client.

The agent prepared a Mutual Release form and sent it to the homebuilder’s agent and told the agent that the client was not moving to Columbus due to not taking the job. The builder did not agree or sign the Mutual Release. Instead, the builder sent back a letter stating that he would release the buyer only if he kept the significant earnest money deposit.

To make the story even more interesting, the builder sold the property to another buyer before the performance date had expired on the contract with my client, and for more money than my client had agreed to pay!

This all occurred prior to my involvement. I suggested getting a letter from the lender denying the loan and submitting a Notice of Termination to the builder, which was in fact done before the performance date in my client’s contract. Still, the builder has refused to return the earnest money deposit claiming that my client had terminated the contract without proper cause when his agent told the builder’s agent that he was not moving to Columbus and that was the real reason for the termination.

The builder’s attorney stated that he thought the financing contingency was exercised only after I was retained, and while he admitted that the Notice of Termination was received prior to the performance date, he questioned the motive. He suggested that it was just due to my analysis of the contract trying to find some way out.

The problem with this story is that the builder’s agent was given too much information that simply did not need to be given. All the buyer’s agent had to do was to submit a Notice of Termination stating that financing could not be obtained. End of story. By giving the other agent all of the other information, the validity of the termination due to the financing contingency is now in question.

Sure, the buyer can sue, and I think of several good legal theories to use. While I think he would win, I cannot guarantee it. Furthermore, legal action can take more than a year; all the while he is without his earnest money deposit and facing significant legal fees.

The point to this story is that an agent needs to be very careful when drafting and terminating a contract. If a buyer is moving here as part of a job transfer or relocation, it might be a good idea to write a contingency making the contract terminate in the event that the buyer does not move to Columbus.

Please do not use the Mutual Release Form to terminate a contract. The Mutual Release Form requires the seller to agree to terminate the contract. While that may be the case in some situations, you can’t rely on it. I can think of many sellers who would not like to see the contract terminate and if given a choice will not agree to do so. There are several sections in the CBR/CBA Real Estate Purchase Contract that gives the buyer the right to terminate the contract. In those instances, no agreement is needed from the seller at all, just a Notice of Termination. Time is of the essence, and you may not have a lot of time to get a termination done properly, and almost certainly there will not be enough time to do it wrong.