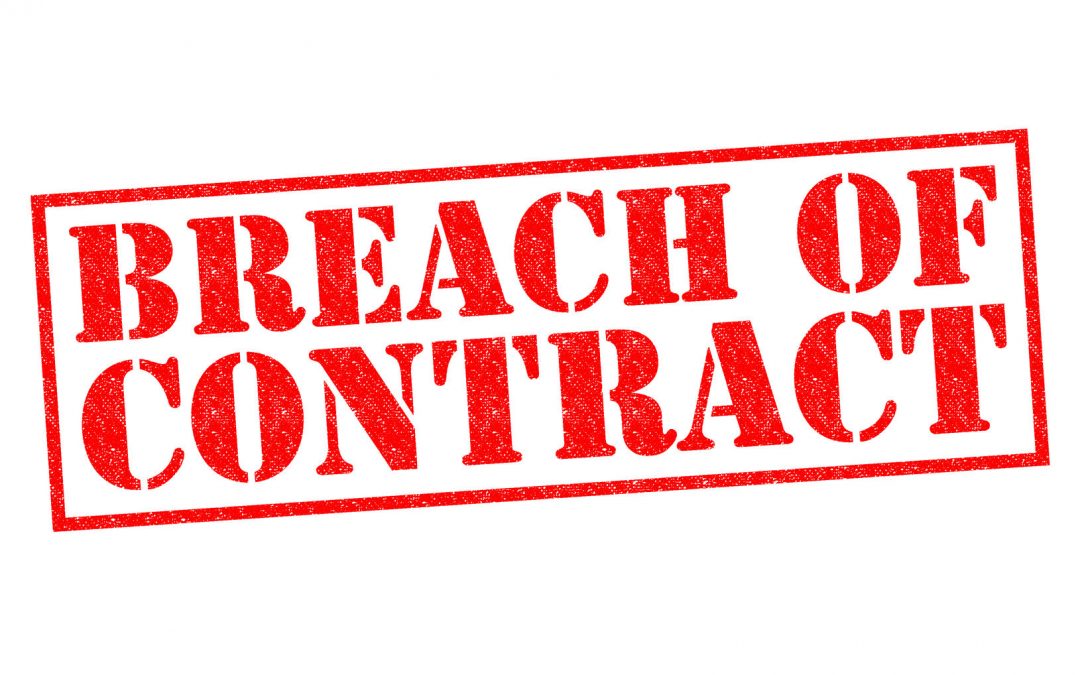 Over the years, I have represented many clients in breach of real estate purchase contract cases. I have represented sellers who did not want to sell, buyers who did not want to buy, buyers who wanted to buy with sellers who refused to sell, and a buyer who was sued for not buying because he exercised his right to rescind due to a fire prior to closing. The myriad of cases resulting from breach of contract in real estate has developed into a well-defined body of law. The decisions in these cases have been very consistent in Ohio with general principles that probably apply to most other jurisdictions.

Breach of contract of a real estate purchase contract for a home can have serious ramifications. If a buyer fails to perform by not buying a home, the seller may experience a multitude of downstream issues as the proverbial dominos fall. If the seller breaches by refusing to sell, the buyer is denied the opportunity to buy that distinct property. The law in Ohio as it pertains to breach of real estate contracts has developed differently depending on who breached the contract. I will examine both perspectives. Some have argued that the type of real estate involved should alter how the law is applied or what law applies to the facts of the case. However, in Ohio, the courts deciding breach of real estate purchase contracts make no distinctions based on the type of real estate involved, such as residential, commercial, or investment real estate.

Seller breach of contract usually refers to the seller deciding not to sell the property to the buyer pursuant to the executed contract. The remedy for the buyer is to force the sale by an action for specific performance. In theory, this makes perfect sense because each property is unique. The only way to compensate the buyer for the loss of the opportunity to buy that particular piece of real estate is to force the seller to perform.

The reality is that pursuing specific performance may not actually work. Last year I had a case where the seller came to the closing and refused to pay a judgment lien in order to convey the property free and clear of all liens as required in the contract. The deal did not close. The buyer promptly filed a Complaint for Specific Performance and a Notice of Lis Pendens. The seller had stopped making the mortgage payments some months before going in contract with my client. Consequently, the bank had started foreclosure against the property and it was sold at the Sheriff’s auction shortly after the filing of the Complaint for Specific Performance.

In the last year I have been asked on a couple of occasions to get the sellers out of the deal because they did not want to sell. I use the following procedure to evaluate these cases:

The first step in any analysis of seller breach of contract is to determine whether the contract was properly executed. One must carefully examine the contract and all counter offers that comprise the contract. Did all signatures occur within dates specified for acceptance? In Ohio, the Statute of Frauds is found in the Ohio Revised Code section 1335.05 which requires real estate purchase contracts to be in writing and signed by the parties. It is not unusual to find real estate agents writing “per phone authorization, signatures to follow.” While this may be a way for the real estate agent to avoid the hassle of actually obtaining the required signatures and to expedite the matter, it does not have a legally binding effect on the parties. If the actual signature is penned after the date permitted for acceptance is there a legally binding contract? If there is not a contract in the first place, there can’t be a breach.

The recent decision in the case of Park v. Acierno, 2007-Ohio-1564 dealt with a situation where a property was owned by a husband and wife. The husband signed a “napkin agreement” which was very scant on essential information, although it did contain a price.  The wife subsequently signed an actual purchase agreement for the same property with the same seller. The wife did not sign the “napkin agreement” and the husband did not sign the purchase agreement. The buyer asserted the concepts of agency and ratification to try to solve the problem of the Statute of Frauds. Without actual signatures, the court held that the Statute of Frauds was not satisfied and there were no enforceable agreements to sell the property.

Time is of the essence in real estate purchase contracts. As a real estate attorney, it is my responsibility to make sure the contract is enforceable, and part of that means that the contract was executed properly. In the event that there is an issue or question as whether the contract was signed by the parties within the permissible window of time, I will prepare a basic addendum in which the parties will ratify their intent to proceed with the transaction on the previously agreed upon terms.

The next step in the analysis is whether any other term of the contract may have terminated the contract on its own. In the Central Ohio area, the Columbus Bar Association and the Columbus Board of Realtors have jointly created a residential real estate purchase contract. Within the boilerplate of the contract are a number of provisions which specify that if they are not strictly complied with, the contract shall terminate. That being said, it is not uncommon for parties to proceed to closing notwithstanding the fact that the contract had automatically terminated for failure of a specific provision. Generally, the buyer wants to buy and the seller wants to sell and the closing takes place even though the contract has technically terminated and would not be enforceable.

If the contract is solid, the recourse for the buyer facing seller breach by refusal to sell, is to file for a Complaint for Specific Performance and also to file a Notice of Lis Pendens with the county Recorder’s office. The filing of the Complaint and Lis Pendens generally gets people focused on finding a resolution to the issue. Sometimes they will comply and sell. Other times I have negotiated a financial settlement. I have never had a seller breach of contract case go beyond the filing of an Answer by the seller/defendant.

Expenses incidental to ownership include, but are not limited to, mortgage payments, insurance, taxes, maintenance, homeowner association dues, and utilities. “To allow the recovery of such expenses would be analogous to allowing a car owner to recoup from a defaulting buyer the costs of maintenance, gasoline, and automobile club membership dues until the vehicle is sold. Such a result, in our view, goes far beyond the reach of recoverable contract damages.” Peterman v. Dimoski, 2002-Ohio-7337, ¶11.

The issue of foreseeability of damages is a logical approach for a seller seeking damages from a breaching buyer, however it is not successful. The court in  Roesch v. Bray (1988), 46 Ohio App.3d 49,51 held, “Although [the breaching party] might have been able to foresee that certain expenses would be incurred in maintaining the property until future resale, the duration and extent of those expenses could only be speculated upon. Were we to hold otherwise, a breaching party could be subjected to liability for similar expenses for months or even years on end.”

When considering the purpose of a damage award in a buyer breach case, the court in Peterman v. Dimoski, 2002-Ohio-7337, ¶13 stated, “The primary purpose of the damage award is to restore the vendor to his or her pre-sale position in other words, to compensate the vendor for the loss of the bargain on the sale. Although the vendor may be entitled to appropriate special damages that follow naturally from the breach, these damages, being contract damages, are not as broad as those available in tort, which applies a simple but for test. Ever since the decision in Hadley v. Baxendale (1845), 156 Eng. Rep. 145, consequential or special damages in contract have been limited to those that are certain, foreseeable, and within the contemplation of the parties at the time the contract was entered into. See Calimari, Contracts (1976), Sections 206-209.”

You have to love it anytime a court cites to Hadley v. Baxendale!

The one item which a few Ohio courts have carved out as a recoverable expense is real estate broker commissions. The scenario is that the first sale involves either a “for sale by owner” or a discount broker and then a full commission broker is subsequently employed to sell the property after the breach. The use of a full commission broker is foreseeable as a reasonable effort to get the property sold as quickly as possible. The courts in Peterman v. Dimoski and Saylor v. Eno, 2007-Ohio-351 both awarded to the seller the additional real estate broker commission the seller had to pay.

In McCarty v. Lingham (1924), 111 Ohio St. 551 the Supreme Court of Ohio, provided the basis for determining damages in a buyer breach case. “The measure of damages in such Case is the difference between the market value of the property at the time when the conveyance should have been made and the sale price stated in the contract.” Over the years since, this concept was modified to be the difference between the value of the property at the time of the breach and the price in the contract. Simply stated, if the property is worth as much or more than the price in the contract, there are no damages. This basic concept has been the basis of the numerous decisions that have followed.

From time to time the issue of a new build home breach of contract comes up. Applying the basic law of Ohio, the builder would have to prove that the house was not worth what was being charged. I have yet to have a builder put forth such a proposition.

A few of years ago in a trial, the opposing counsel put forth the concept of mutuality of remedies as a reason why his client should be able to use specific performance to make my client buy the property after the alleged breach. Although the theory is applicable in many other breach of contract settings, real estate is different. The court also rejected his theory, but I must admit it was interesting. The courts in Ohio have firmly established that while specific performance is perfectly acceptable to use against a seller in breach, it is not the common remedy in a buyer breach case.

Recently I had lunch with my opposing counsel the day after I won on a Summary Judgment in the defense of a buyer breach case. He commented that it just did not seem right that his client should not be able to recover expenses incidental to ownership. After all, my client breached the contract by not closing within the stated time. The seller had promptly resold the property for $5,000 more than my client was going to pay, but he had to hold it for 65 days beyond the scheduled closing with my client. It was a million dollar home with alleged significant per diem expenses. The court found the seller had no damages that were recoverable under Ohio law. As we discussed it further, he reluctantly acknowledged the problems that would be incurred if there were not such a bright line rule limiting recoverable damages to the difference between the contract price and the value of the property at the time of the breach. While in our case it was a matter of only 65 days, but what if it had not sold so quickly? Where do you draw the line? Of course, the litigation would be endless.